While it would take hundreds of pages to enumerate all of the impacts of Lee Rizzuto’s bold experiment of rapid targeted ALS investment (given the 50+ publications alone), following are a few highlights (and the summary Dashboard presents a snapshot and is included in the Evaluating Impact tab)

Funding (45% of budget) toward Target Identification efforts has led to the identification of promising new disease targets such as:

ALSFAC has also been a major funder of the Answer ALS initiative to obtain longitudinal clinical and deep biological data on 1000 ALS patients and 100 controls, which should help address questions about the best approaches for utilizing human stem cell-derived motor neurons, in addition to addressing the clinical and scientific challenge of patient stratification. Through its Target Identification funding ALSFAC has also driven the creation of multiple new animal models of disease, which will be useful for unraveling fundamental questions about ALS.

ALSFAC has invested approximately 27% of its funding in clinical trials-related initiatives. Before ALSFAC was launched, the ALS Association in collaboration with Mass General Hospital’s Neurological Clinical Research Institute, under Dr. Merit Cudkowicz’s leadership, had an initiative to fund early stage ALS clinical trials. 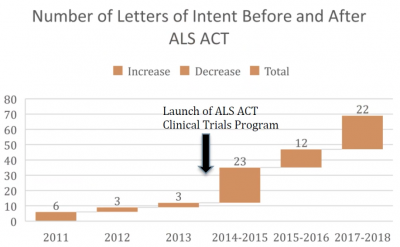 In the 3 years prior to the launch of ALSFAC (and the associated increase in funding for this effort) the ALS ACT Clinical Trials program had received 12 applications. In the 3 years following the launch of ALSFAC this program received 57 new applications. In the 5 years since launch ALSFAC funding contributed directly to the clinical testing of 8 new potential ALS treatments, and the participation of 270+ ALS patients in the clinical trials of:

In addition to directly funding clinical trials, ALS Finding a Cure® has also funded the development of the tools necessary for the clinical trials of the future, including imaging biomarkers for both the brain and spinal cord (TRACK ALS, SPINE ALS, and the TDP43 PET Imaging Challenge), home-based outcome measures (AT Home study), development of the infrastructure for future ALS prevention trials (DIALS), and a new method to track levels of SOD1 (the first genetic ALS target ever identified) in people over time, which is currently being considered for incorporation into clinical trials (SOD1 Kinetics). 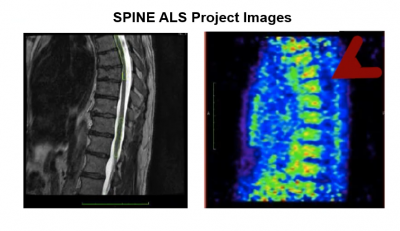 ALSFAC has invested almost 10% of its funding in two large infrastructure efforts:

These vital resources are open access and used by researchers from both industry and academia across the globe for biomarker identification and validation efforts, the linkage between clinical findings and biological data, natural history data, information about concomitant medication use within the ALS populations, and a variety of other important uses.

As a snapshot of the impact this investment in infrastructure has had, to date the ALS Biorepository has added more than 10,000 samples to its collection, and distributed 1000s of these to investigators around the world. NeuroBANK™ has incorporated longitudinal, detailed, standardized clinical data from almost 5000 individuals, and has expanded to include more than 20 different clinical studies. Because these infrastructure initiatives are large, complex, resource intensive, and open to everyone they are very challenging to support, and therefore a key contribution from the philanthropic sector to accelerate the efforts of the larger ALS research and drug development community.

ALSFAC has always kept the ALS patient front and center. In addition to its research, clinical, and infrastructure funding, ALSFAC has funded the development of incredible patient resources like the ALS Videos and the Research Access Nurse, a hotline for information and to answer questions about ALS clinical trials (ALS One MAP). ALSFAC funded investigators have also actively disseminated information around ALS clinical and scientific breakthroughs and challenges via print, TV, social media, and through public presentations.

ALSFAC has been vigilant about tracking its progress, challenges, and successes. All ALSFAC investigators, in addition to submitting quarterly milestone reports, twice a year complete detailed updates on a wide variety of metrics, which can then be summarized in a Dashboard format (as shown in the figure below). In addition, using a methodology developed by Executive Committee member Mr. Tom Gentile and ALSFAC Scientific Consultant Dr. Melanie Leitner, scientific members of the Executive Committee evaluate each project incorporating budget, level of technical certainty, and degree of impact. Project progress is then reviewed on a regular basis by the full Executive Committee. 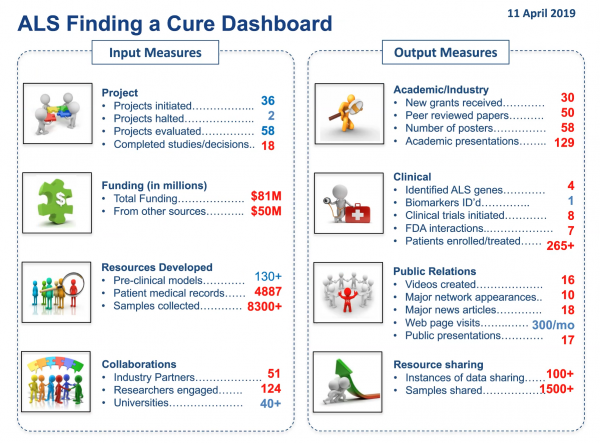